I have finished two books since my last post.  I will tell you a little about each. First up, "Prophecy Of The Female Warrior" written by K.A. Young. I am not friends with this author on Facebook.  This is a quick but very entertaining read. The book is centered around Anna who recently became a widow. She is in a deep depression and just trying to get through each day. Her sister Julie is a big help to her, but nothing seems to take the pain away.  At her husbands funeral Anna has a vision that leads her to believe that her husband was murdered. The vision also causes her to scream and cause a scene, something her mother in-law is not happy about. ( Anna has had visions all of her life and has never really felt like she fit in. Now people are looking at her like she is crazy.)
At the grave side of her husband during the service she notices a stranger watching her. She asks her brother in-law about the man staring at her, one she feels compelled to talk to. Her brother in-law Dan tells her to stay away from the stranger that he looks dangerous. But Anna is drawn to the man and before leaving she just can not stop herself from going over to him.  The stranger has something to tell her, but Dan comes to her side and makes her leave before the stranger can deliver his message.  Things get crazy for Anna right after the encounter with the stranger. She is being stalked by a killer and the stranger turns up at her house and then again at her husbands office when she goes to clean out his office.  The Stranger (Eli) convinces Anna to trust him that he knows what happened to her husband and will tell her if she will accompany him to a safer place. She agrees and she is taken to a secret compound and told about her true ancestry and what really happened to her husband. It seems Anna is a Nephilim and part of an old prophecy. Things heat up between Anna and Eli pretty quickly. I can not go into too much more about the book without giving everything away. If you like paranormal then this is a good read. I would not recommend for younger reads due to some sexual content seventeen and older I think.  this book is part of  the Nephilim Warrior Series.
http://www.amazon.com/Prophecy-Female-Warrior-Nephilim-Series-ebook/dp/B0092ICWB6/ref=sr_1_1?ie=UTF8&qid=1397678445&sr=8-1&keywords=Prophecy+of+a+Female+warrior

I am reviewing the Kindle version.  At the moment it is a free book so check it out. 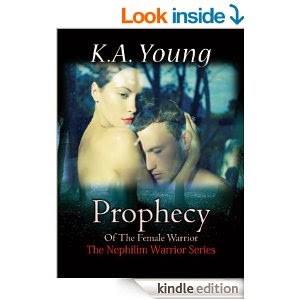 Next up another quick read and again paranormal. "Witchwood Estate- Going Home" Written by Patti Roberts. I am friends with Patti on FaceBook.
Now this one I really liked.
Alexandria Santorini learns as a child that she comes from a long line of Harvey witches. She has never really had any friends, but she doesn't mind, after all she has Olly and Martha Barnby.  She was taken in twelve years ago by the Barnabys after her parents died.  Now that Alexandria is almost an adult it is time for her to leave her loving guardians and return to Ferntree Falls and Witchwood Estate her legacy.  She hopes on the bus after a long sad farewell and heads to Ferntree Falls. While on the bus she meets a strange boy who isn't really a boy but kind of a ghost but not a ghost. It turns out he was cursed by a witch and he is now looking for his love who has vanished. Things on the bus ride get crazy and Alexandria nearly loses her life. There is an evil witch on the bus and she wants something from Alexandria. The story is very short only 49 pages, but is an excellent introduction to the series.  This one is fine for younger reads as well as older ones.  Again it is a paranormal book so if you like that kind of book it will be perfect for you.  It is also free for Kindle at the moment.
http://www.amazon.com/gp/product/B00BWM2WLA/ref=cm_cr_ryp_prd_ttl_sol_9 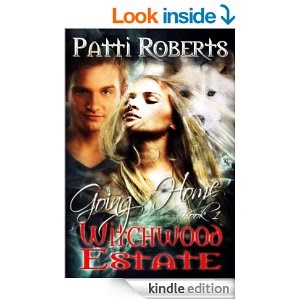 Posted by Cricket at 4:37 PM No comments:

Well a lot has happened since my last post. I have read several books but have not had time to post reviews for those books.  So let me just take a few seconds to post a review for my last read. I promise to try to post reviews as I finish books but sometimes I am being pulled in so many different directions at once. I am sure you know how it is.

Now onto the review.  The last book that I finished reading was "The Royal Ranger" (Ranger's Apprentice) written by: John Flanagan. 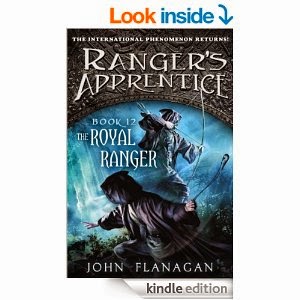 I have loved this series ever since my son asked me to read the first book in the series. I was so bummed out when he wrote the final to the series, then he came out with this one. This one is set some 15 plus years after The Lost Stories. Will is now the gruff Ranger. He has changed and is no longer the happy go lucky Will that he used to be. It is heartbreaking once you learn what changed Will. This book starts out with a punch and doesn't let up. Horace and Cassandra now have a teenager who is testing them. They are worried about how to make their daughter behave before something happens to her and they are worried about Will. Old friends get together they look to Halt for guidance and once again he does not let them down.
This book brings back memories of the first books in the series. Will is more like Halt than anyone ever thought he would be and his new apprentice is headstrong, spoiled and self centered. I smiled a lot while reading this one.  It was so nice to find out how some of the character's are doing, and I was happy to find out what happened to Tug. (You will have to read the books to find out who Tug is)
I really hope he does follow up books and maybe an entirely new series with Will and his Apprentice.

Great book pick it up and don't let the fact that it is a young adult book stop you from enjoying this series.
http://www.amazon.com/The-Royal-Ranger-Rangers-Apprentice-ebook/dp/B00BPDR4E6/ref=pd_sim_kstore_11?ie=UTF8&refRID=1XC8V9GZSHWNQJCQZ7HC

If you are new to this series here is a list of the series books in order:  1. The Ruins of Gorlan
2. The Burning Bridge  3. Icebound Land  4. The Battle for Skandia  5. The Sorcerer of the North
6. The Siege of Macindaw  7. Erak's Ransom  8. The Kings of Clonmel  9. Halt's Peril
10. The Emperor Nihon-Ja  11. The Lost Stories  and finally  12. The Royal Ranger.
John Flanagan also has another series out I have read the first book of the new series and of course I love it as well.  I am sure at some point I will come back and do a review after I read the book again to refresh my memory. The other series is The Brotherband series.

If you follow this blog you will find out that I read a lot of books and I have eclectic taste. I will pretty much read anything. Now if I like everything I read or not is another story.  The other thing you will see,  I will not bash any authors on this blog.  My goal is to give my opinion on different books not to bash authors.  I will however tell you if I am friends with any of the authors on Facebook or not.

Oh, I am not friends on Facebook with John Flanagan.   Now I have to run I have dream catcher's to make and if I have time a chicken coop to finish.  Have a wonderful day!!
Posted by Cricket at 4:30 PM No comments: