A Shot Of Red 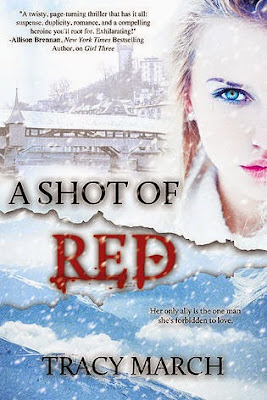 Now available at Amazon, Barnes and Noble and iBooks.
Learn more about the author at: Tracy March.Com

Excerpt :
Her only ally is the one man she's forbidden to love.

After fleeing D.C. following a one-night stand that had her reeling, biotech company heiress Mia Moncure has thrived working with a humanitarian aid team administering vaccines in Haiti. When the United States is threatened with a flu epidemic, Mia's grandmother demands her return to unveil a new flu vaccine for Moncure Therapeutics. She arrives to find that her ex-boyfriend, the company's PR Director, has died in a suspicious accident in Switzerland that Mia soon suspects was murder.

Determined to reveal a killer, Mia heads to Switzerland where she's threatened as she discovers a plan to infiltrate the vaccine for nefarious purposes. Desperate for backup, she turns to sexy Gio Lorenzo, Communications Director for her mother, a high-ranking senator--and Mia's one-night stand. While negotiating their rocky relationship, they race to uncover a deadly scheme that could ruin her family's reputation. But millions of people are being vaccinated, and there's more than her family's legacy at stake. Mia and Gio struggle to discover the truth about the scheme and their feelings for each other, but it just might be too late.


My Review:
Tracy March has really written a great book with this one.  Her characters are well developed, the scenes are detailed and richly written.
I enjoyed the twists and turns this one took. Action packed and it was a believable crime.  She keeps you guessing with this one, who will die next?
Brent, Mia's ex-boyfriend has died in an accident or so that's what everyone thinks, but Brent was looking into something which is why he was in Switzerland. He left a cryptic message for Mia with his mother, once Mia returns to the United States she receives a call from Bents mother asking her to come to her home. After viewing the message Mia and Brent's mother are left with questions that only can be answered if Mia travels to Switzerland.
But Mia is supposed to be doing a tour to promote the families latest vaccination for the Flu, how will  she get out of the tour and out of the country without anyone knowing?
Will Mia and Gio uncover the mystery in time to stop thousands more from dieing?
Who killed Brent? Why was he in Switzerland?  Who is now trying to kill Mia? Is she getting too close to solving the mystery?
Mia and Gio the two main characters in this book have such a hot chemistry and  bit of history. They work well together and compliment each other.  Mia is spontaneous and unpredictable and has trouble expressing her emotions.  Gio is calm, level headed and head over heels for Mia. When Lila Mia's grandmother asks Gio to go to Switzerland to help Mia and to keep Mia safe he can not refuse.
You can tell that Tracy March has done her homework in this book, the places, the murder weapon all very well thought out and researched.
The ending was a total surprise and I will not spoil it for you, just be ready to have your mouth hang open.
Posted by Cricket at 10:20 PM